‘…where even sunrays will not research.’ This is how the photographer and photo journalist Hans Soosaar (1903–1961) described Jüri’s home who lived on Köie Street. As one of the first professional photo journalists in Estonia, Soosaar has been fortunate and unfortunate enough to capture life under various power regimes. His photos can be seen on the columns of Rahvaleht (The People’s Magazine), Noorte Hääl (the Young People’s Voice), the Revaler Zeitung, Rahva Hääl (the People’s Voice) and others. His photo lens has seen the colorful balls of the Estonia Theater, people executed at the Klooga Concentration Camp, but also the simple life in the residential areas during the first Republic of Estonia.

At the end of the 1920s, Soosaar walked on the streets of Kalamaja and Põhja-Tallinn, and recorded the meeger living conditions of Tallinners. It is not known why this photographer, who was just at the beginning of his career, decided to photograph the homes of those with low-income and the unemployed. [1]. Although the press at the time chose to remain silent on issues that would cast a shadow on the image of the young republic, Soosaar fortunately did not follow this tactics of disregard. [2]

On the exhibition You can see 10 photos of Soosaar’s apartment depictive photo series dating back to the 1920s. The photos come with detailed descriptions of the life of the inhabitants, the texts originating from the back of the photos. The exhibition was first seen on the streets of Kalamaja in the autumn 2019. Then the pictures were placed in front of the same houses that Soosaar captured over 90 years ago. Soosaar’s photos, placed on the streets of their homes, brought people living in dreadful and humble conditions out of the shadows into the autumn light. Please take a moment from your day and have a look.

The exhibition was part of the Tallinn Photo Month ’19 satellite program. 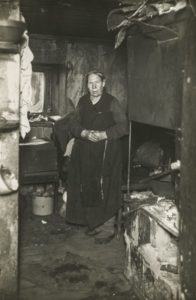 1. Köie tn 1a: Jüri
“A crooked old man, living in a totally dark basement where no ray of light can reach. There’s also no lamp, since there’s no money to buy kerosene. The relatives live in the apartment next door, but they don’t take care of the grandfather. The old man gets a small monetary support from the city and is on the list to a retirement home, but they don’t have any rooms, and you cannot go to the home unless someone dies first and through that a room becomes available. The old man goes almost every day to the city welfare department to get news about the issue.” (AM _ 16313: 12 F 5900: 12)

8. Girgensoni/Tööstuse 4-11: Marie
“37 years old lady. Got typhus at the age of 13 and as a result  became insane; the condition has remained the same for 24 years. Tends to get nasty during outbreaks of the illness, that’s why is separated by a net-cage. Rocks her body violently, especially when influenced with nerv convulsions.” (TLA.1465.1.1156)