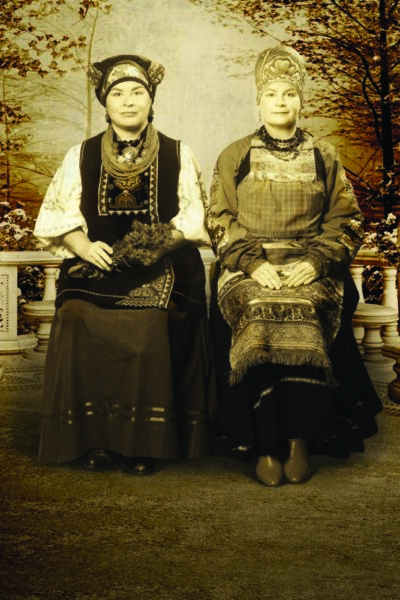 The main heroines of our project “The power of woman” are women who play a significant role in the culture of the Republic of Estonia, in the social and intellectual life of our society.

Participating in a photo session, they tried on ancient folk costumes that their ancestors had worn (with precision up to a specific region or, as they used to say, up to a province). Among our heroines were the director of the Kadriorg Art Museum Aleksandra Murre, the director of the Russian Theater Svetlana Jantšek, the publisher Valentina Kašina and several other outstanding personalities.

Ten samples of Russian and Ukrainian traditional folk costumes are displayed in the exhibition. Following the reliable evidence we have received over the centuries – these are museum exhibits, collections of enthusiasts, as well as photographs and portrait paintings – we have succeeded to some extent to depict the beauty and harmony of the appearance of a Slavic woman in traditional folk clothes.

Clothing is an important part of human material culture. Visual spells are encoded in ancient clothing, and the folk costumes themselves have actually represented a kind of incantation over the centuries. Without even knowing it, following the traditions of our ancestors, we create clothes that echo what our ancestors were well aware of: the human body is sacred, but the spirit is subject to the laws of the universe. The Slav nations, masters in their field, were guided by their innate taste and sense of beauty in creating everyday, festive and ritual garments.

The reconstruction of clothing sets made especially for this photo shoot is part of the exhibition and represents the author’s creative interpretation of the preserved originals. The only practically unfulfilled task was to cover these clothes with gold dust as a “time stamp”, which is the most expensive component of the reconstruction. Photographic portraits of our heroines reflect not only the appearance of a woman in almost disappeared folk costumes and the beauty of ancient material culture, but also the genetic connection with the ancestors.