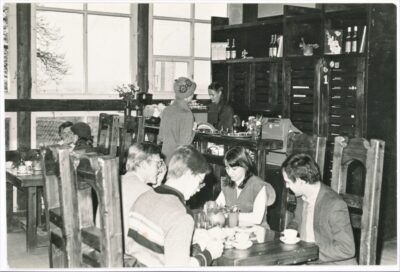 The restored interior of the Maiden Tower, belonging to the Kiek in de Kök Fortifications Museum, reminisces the tower cafe’s golden days.

Tallinn City Museum has brought a shard of recently passed decades’ history to life by restoring the interior of the 1980s on one of the floors of the Maiden Tower. The furniture of the legendary 1980s iconic cafe, creation of architect Aala Buldas, has also made a return to the museum and into the use of the visitors.

After long renovations in the Maiden Tower, with a history stretching back to the Middle Age, the cafe was finally opened in the year of the Olympic Sailing Regatta, at the very end of the year 1980. One of Tallinn’s most unique cafes that connected one of the oldest masonry towers with a modern interior was born under the direction of architecture historian Villem Raam, engineering by architect Tiina Linna and design by interior architect Aala Buldas.

The 1980s were the golden age of the cafe – it was at the peak of its popularity. The popularity started silently fading away in the whirlwind of changes of the 1990s, which was topped with the disappearance of all of the original furniture designed by Aala Budas. After lengthy ownership disagreements, the tower was given to the city in 2010 and Tallinn City Museum started using it.

In recent years, the City Museum has started putting together a permanent exhibition that tells the history of the tower. The permanent exhibition “The Maiden Tower as an art temple” was opened on the II floor last year. You can get an idea of what the atelier that was in the tower could have looked like at the times when aquarellist Carl von Winkler, brothers Kristjan and Paul Raud, architect Karl Burman snr and artist Henrik Olvi were working here. The tower’s history from the beginning of the 20th century to the end of the 1960s, which is when the cafe planning started, is reflected.

In the winter of 2021, the furniture for one floor in Aala Budas’ original design was brought back to the tower. In addition, other kinds of items that create the atmosphere of the era are used in the design of the Maiden Tower exhibition-cafe. For example, the forged hanging sign of Karika bar and designs from the Olympics made by blacksmiths Tõnu Laugu and Heino Müller. The atmosphere of the 1980s has been recreated in the room.

Curator hours are planned in order to introduce the new permanent exhibition, the audience program will be amended soon.

In case of a group of at least 10 people, a curator hour during which the compilers of the exhibition Risto Paju and/or Tõnu Pedaru speak more about the topic and introduce the exhibition, can be ordered.