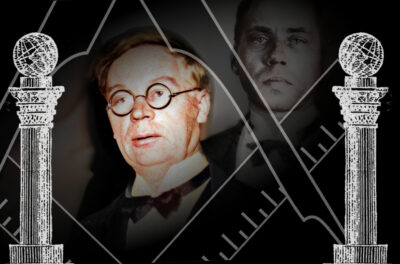 The members of the lodges were the antiquarian and bookseller Harald Liiker and the writer Mait Metsanurk (in the photo).

In the Gate Tower of the Short Leg on Friday, May 27, was opened the exhibition “Invisible Light. Freemasonry in Tallinn between the two world wars ”. Exactly 95 years ago, on May 27, 1927, the first Estonian-speaking Freemason’s lodge, Kalevipoeg, was consecrated in Tallinn.

With the emergence of national self-determination and nation states in the nineteenth century, an interesting phenomenon emerged in Europe. Along with nationalism and national romanticism, there was a growing wave of interest across Europe regarding mysticism and the occult, as well as esoteric teachings. This wave arrived in Estonia in the early years of the country’s independence as a rather marginal, but still interesting phenomenon.

Theosophy was the strongest representative of Western esotericism, including in Estonia.
The Estonian Co-Masonic lodges Kalevipoeg, Sveta Nezrimago and Za Vernost, founded in Tallinn in the 1920s, were strongly influenced by theosophy. The lodges included intellectuals of both Estonian and Russian nationality, enthusiastic about the high ideas of Love Thy Neighbour and the search for eternal truth, and dedicated to the study of occult and philosophical systems.

The members of the lodges were the antiquarian and bookseller Harald Liiker, the writer Mait Metsanurk, the artists Helmi Reise and Karl Hoerschelmann, the philosophers and poets Mikhail Janson, Mikhail Sidorov and others.

The activities of the lodge Kalevipoeg have been introduced by the wiseman and freethinker Gunnar Aarma, whose parents August and Liisi Abram were members of the Kalevipoeg lodge.

Mikhail Sidorov, the last regional Master of Estonian lodges, wrote in 1940: “… what we are going through right now. Everybody’s fight against everybody. It can really be said that there is a great battle going on in all mankind. Every step in life, every question, every cultural expression represents a front. Everywhere, we see the extremes that are indefensible. Difference in views, beliefs, way of life, techniques. No one wants to give in to each other: neither countries, nor nations, nor individual people. Nerves are tight, overwhelmed. War on land, at sea, underwater, in the air. The emergence of unexpected alliances. Unforeseen ties….”

The exhibition offers an insight into the hidden world of the spiritual search for a part of Tallinners in the 1920s and 1930s.
The curators of the exhibition are Meelis Piller and Toomas Abiline, designer Anne Järvpõld.

The exhibition will remain open until May 2023.