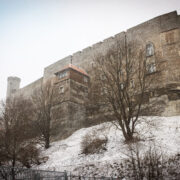 Books and films about the Middle Ages are valuable learning tools. There are limited remains of cultural materials from the 15th century, which is why verbal and pictorial narratives are of interest to both young audiences and adults. The last known Estonian film on the Middle Ages dates back to 1984. Since then, our knowledge of the Estonian Middle Ages has greatly expanded and opened up new  perspectives. The museum has the opportunity to open up the story of the film and Melchior and its background. The Tallinn City Museum’s ‘Archaeological Autumn’ series of events, now in its seventh year, focuses this year on the arts: the truthfulness of historical books and films and their analysis. The main focus will be on Melchior the Apothecary, based on Indrek Hargla’s novels, with three films on the subject to be screened in 2022.

The archaeological autumn programme includes guided tours on the theme of the medieval city in the urban space and a series of lectures at the Kiek in de Kök Fortification Museum.

A TRIP ALONG THE PATHS OF THE FILM “MELCHIOR THE APOTHECARY”

What was Tallinn like in 1409, and what has remained of it today? What was used to cover the windows when there was no glass? Where did Tallinn’s first Apothecary live and from whom did people buy their medicine before him? The tour will show the city through the eyes of the Apothecary Melchior. The nuances of making a historical film will be explained. Can 15th-century Tallinn even be portrayed realistically?

The tour starts at the Kiek in de Kök artillery tower. From there, the route takes you through Toompea, owned by the Teutonic knights, to the Lower Town ruled by the Hanseatic merchants. Along the way, you will visit the 600-year-old Raeapteek pharmacy, taste the pharmacy schnapps and Panis Martius. The excursion ends at the Tallinn City Museum, where 15th-century artefacts preserved in the  collections will be presented.

Wear comfortable shoes, the right clothes and off to an adventure!

On the paths of “Melchior the Apothecary” Excursion

Sunday, 17 April
At 13.00 in Estonian
At 14.00 in English
NB! The museum is closed on this day, the tour starts outside the Kiek in de Kök!
Tickets are available at Fienta.

EXHIBITION “HOW THE FILM ABOUT MELCHIOR THE APOTHECARY WAS MADE” 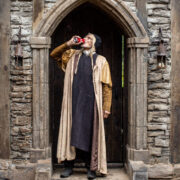 29 April to 12 June
From 29 April, the photo exhibition “How the film about Melchior the Apothecary was made” will be open in the fifth, top-floor hall of Kiek in de Kök. It will present mysterious moments from the filming of all three “Melchior the Apothecary” films. In addition to the photographs, the exhibition also includes costumes used in the film and thematic artefacts from the collections of Tallinn City Museum.

We thank the film crew of ” Melchior the Apothecary”, Apollo and Agenda P.

LECTURES AT THE KIEK IN DE KÖK FORTIFICATION MUSEUM 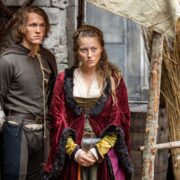 Riina Rammo: “An archaeologist’s view of clothing in medieval Livonian towns”. Riina Rammo is an Associate Professor of Archaeology at the University of Tartu, who studies archaeological textiles.
The lecture will take place on the top floor of Kiek in de Kök.

Tallinn City Museum’s annual archaeology series brings historians and archaeologists to present the latest research.
Now in its seventh year, this year’s Archaeological Autumn continues on the paths of literature and cinema, focusing mainly on the “Melchior the Apothecary” films that will be released in 2022. As books and films help to create a good complete image of the past, archaeologists can use them as a basis for presenting their own research topics.

Martin Malve: “Violence, Medicine and the Church of St. Olaf in the Light of Melchior the Apothecary”. Martin Malve is an osteologist, or researcher of human bones. In his presentation, he will give examples of how it is possible to identify what diseases or wounds people suffered during their lifetime and what these wounds look like on their bones. He will also discuss whether arsenic or other poisoning, for example, can show up in any way on people’s bones.
The second half of the lecture will focus on the 2020 excavations of the St. Olaf church. In the presentation, Martin Malve will give comparative examples from the book and the film “Melchior the Apothecary”.

Monika Reppo: “A cure for every ailment: glass pharmacy jars and bottles”.
Monika Reppo is a researcher of archaeological glass. In her presentation, she will discuss the medicinal vessels that were widespread in the Tallinn area in the Middle Ages and whether this is consistent with what the film shows.

Ain Mäesalu: “Armament and warfare in medieval fiction (mainly through the example of “Apothecary Melchior”)”.
Ain Mäesalu is an archaeologist who has mainly studied finds relating to military weapons and armour. In his presentation, he will analyse precisely this part of the film “Apteeker Melchior”, but will also give examples from other films concerning the Middle Ages.

Those interested in the Rae Pharmacy and the history of medicine will also have the opportunity to attend lectures in the pharmacy’s birthday year. Read more.

Pictures:
Shooting of the first film of “Melchior the Apothecary” at the Cinevilla film location in Latvia: by Robert Lang.
Shooting of the film in the Danish King’s garden and a tour of the streets of Tallinn: Meeli Küttim, Tallinn City Museum.