The functionalist villa on Kotzebue Street in Kalamaja has been renovated and is now open to the public. The renovation project of the 1930s building, popularly known as the Valge Luik (White Swan), was carried out by Eesti Ehitusprojekt, the facade and exterior areas were designed by architect Helle-Triin Hansumäe and the interior design was created by Andres Labi and Janno Roos from Ruumilabor. 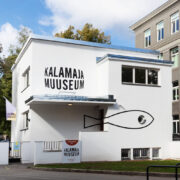 The interior of the building (once built as a dwelling) has now been extensively renovated, with the surviving original interior design elements restored. A new modern ventilation system has been installed. The exterior walls are just as bright white as the interior walls. Inspired by the name of the location, the floors on the second level have a herringbone parquet, and the stone floor on the first level is also in a herringbone pattern. The only surviving original wooden staircase with balustrade and handrail connects the first and second levels. The doors and handrails of historic Kalamaja houses have been drawn on the building’s interior doors and walls: you can recognise places like Salme 12, Salme 25, Linda 9 and Tööstuse 23. At the end of September, the Kalamaja Community Museum, a branch of Tallinn City Museum, will open in the building. 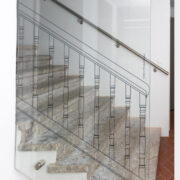 Kotzebue 16 is one of the few functionalist buildings built in the Kalamaja area in the 1930s that has remained to this day. The building was completed in 1934 according to the design by architect Herbert Johanson, and the family of Hans Einberg, professor of mechanics at the Technical University, lived there for 10 years. After the bombing and burning in March 1944, Valge Luik became a densely packed dwelling for seven families, some even living in the garage. “One room with only one window had to fit a cooker, a sink, a bookshelf, cupboards and just one bed for two people. There was a communal toilet on the ground floor and a laundry room in the basement,” recalled one former resident from memories shared with the Kalamaja Museum. 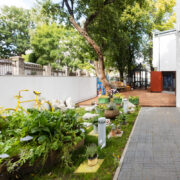 In 1985, the building was converted into a museum, when present-day Põhja-Tallinn and part of Haabersti were called the Kalinin region, and a branch of Tallinn City Museum – “M. I. Kalinin in Tallinn” functioned here. In 1988, a memorial room was opened on the second floor in memory of Evald Aava, the creator of the first Estonian opera, “The Vikings”. A year earlier, an open storage room for toys had been opened on the first floor, which grew into the Tallinn City Museum’s Doll Museum, later renamed the Children’s Museum. From 2014 until September 2018, when the building was closed for renovation, it housed the Kalamaja children’s museum Miiamilla.

The renovation of the building at 16 Kotzebue Street was led by the City of Tallinn, the Tallinn City Museum and the Tallinn City Property Department.
The building was renovated by EVIKO AS and EVIKO Inseneribüroo, designed by Eesti Ehitusprojekt, constructed by Inseneribüroo Jaan Mõttus, the facade and exterior areas were designed by architect Helle-Triin Hansumäe and the interior design was created by Andres Labi and Janno Roos from Ruumilabor OÜ. Graphic design for the museum is by Refleks OÜ.

Download images of the building and outdoor area from HERE 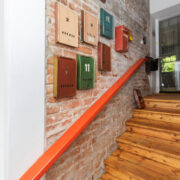 The interior of the building transformed into a museum for Kalamaja contains references to the earlier periods of the building as well as the whole of the Kalamaja district. The design uses authentic local materials, details and photographs of historic buildings, as well as donations from the museum’s collection campaign. The interior design is by Andres Labi and Janno Roos from Ruumilabor. 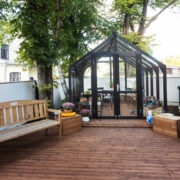 The outdoor area of the museum has been designed as a meeting and social space for museum visitors and people from the local community. The facade and outdoor areas were designed by architect Helle-Triin Hansumäe.