The building that nowadays houses the Children’s Museum Miiamilla was built between 1936 and 1937, and was erected initially as the main building of the Kadriorg Children’s Park. It was designed by Alar Kotli and Villem Seidra. This children’s leisure complex was very innovative for its time. It was established by the State Parks Government headed by Peeter Päts, brother of the then Head of State, Konstantin Päts. Here the children were able to spend meaningful leisure time under supervision of expert instructors of the Estonian Sports Federation. Swimming pools in front of the main building were used for swimming classes and on the playground you could play ball games and do gymnastics. In addition to these areas, the children could attend singing lessons and also learn about nature and history of their homeland. From time to time, trips were made to areas close to Tallinn. A valuable cinema equipment was set up in the large dining room of the main building, to provide cinema experience for all. The building also had changing and laundry rooms, storage areas for games and sports equipment, work offices and official lodgings.

During Soviet times the premises was used by a sports school. Cycling, swimming, ball games, gymnastics, skiing — this is just a small list of things children have been able to do here throughout the ages.

From 1953 to 1962, the building housed the IV Library of the Executive Committee of the Workers’ Council of Deputies of the Tallinn Sea City District. The library premises was only a small room of 14 m².

The building also served as a long-time training ground for the legendary sports dance club Palestra, created in 1978 by Reet Krieger.

Over time the facilities of the Children’s Park declined in value. Outbuildings, pools and grandstands were demolished. Demolition of the main building was also considered. Fortunately, however, in 2003, the building, that has great environmental and architectural value, was placed under heritage protection.

Renovation of the building started in 2007 with the support of the Tallinn Cultural Heritage Department.

On September 25th, 2009, a new branch of the Tallinn City Museum, the Miia-Milla-Manda Museum, was opened here.

As of June 15, 2014, the new name of the museum is Kadriorg Children’s Museum Miiamilla. 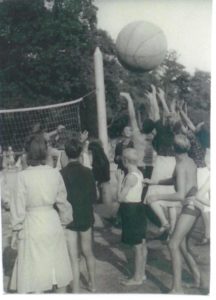